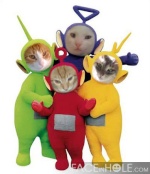 Bartonella henselae is a gram-negative organism that replicates within erythrocytes and endothelial cells. The organism is the most common cause of cat scratch disease as well as bacillary angiomatosis, and bacillary peliosis, common disorders in humans with AIDS. Humans with cat scratch disease develop a variety of clinical signs such as lymphadenopathy, fever, malaise, weight loss, myalgia, headache, conjunctivitis, skin eruptions, and arthralgia. Most cases of cat scratch disease are self-limiting but may take several months to completely resolve. Cats can also be infected with B. clarridgeiae, an organism that has also been associated with cat scratch disease. It is currently unknown whether other Bartonellaspp. that infect cats are common or associated with human or feline disease.
Bartonella henselae is transmitted between cats by fleas. Based on seroprevalence studies in cats, exposure to Bartonella spp. varies by region around the world but exposure is very common. The prevalence rates for B. henselae in blood of cats and fleas collected off their bodies were 34.8% and 22.8%, respectively. The prevalence rates for B. clarridgeiae in cats and their fleas were 20.7% and 19.6%, respectively. Bartonella henselae survives in flea feces for days after passed by infected C. felis. Thus, cat claws and teeth may be contaminated with the organism by ingesting fleas or flea feces during grooming and then transmit the organisms to people by bites.
Most seropositive, blood culture positive, or PCR positive cats are clinically normal. However, Bartonella spp. infection of cats has also been associated directly or indirectly with a variety of clinical manifestations like fever, lethargy, lymphadenopathy, uveitis, gingivitis, and neurological diseases. How often cats become ill from Bartonella spp. infections is unknown and more information is needed. However, it can be difficult to determine which cats have been exposed and which cats are diseased. For example, in recent studies of stomatitis, seizures, and uveitis in cats, the prevalence rates for Bartonella spp. antibodies in feline sera were not significantly different for cats with and without disease. It is also still also still unclear as to why some cats develop Bartonella associated illness and others do not. Immune suppression or pathogenic strains are possible explanations.
Blood culture, PCR assay on blood, and serologic testing can be used to assess individual cats for Bartonella infection. However, there is no positive result that correlates to clinical illness. Cats that are culture-negative or PCR-negative and antibody-negative and cats that are culture-negative or PCR-negative and antibody-positive are probably not a source of flea, cat, or human infection. However, bacteremia can be intermittent and false-negative culture or PCR results can occur, limiting the predictive value of a single battery of tests. With PCR, false positive results can occur and positive results do not necessarily indicate that the organism is alive. While serologic testing can be used to determine whether an individual cat has been exposed, both seropositive and seronegative cats can be bacteremic, limiting the diagnostic utility of serologic testing. Thus, testing healthy cats for Bartonella spp. infection is not currently recommended in most situations. Testing should be reserved for cats with suspected clinical bartonellosis. If the results of Bartonella tests are negative in a clinically ill cat, the organism is not likely the cause of the clinical syndrome unless the infection was peracute and serological testing was used as the diagnostic test. If the results of Bartonella tests are positive, the agent remains on the differential list, but other causes of the clinical syndrome must also be excluded. If no other cause of the clinical syndrome can be determined, a therapeutic trial with a drug with presumed anti-Bartonella activity could be started. Administration of doxycycline, amoxicillin-clavulanate, erythromycin, or fluoroquinolones can limit bacteremia but does not cure infection in all cats and has not been shown to lessen the risk of cat scratch disease. Thus, treatment is generally recommended for clinically ill cats. Doxycycline at 10 mg/kg, PO, daily, formulated into a flavored suspension (to avoid esophageal strictures) for 7 days is the first drug of choice. If a positive response is achieved, continue treatment for 2 weeks past clinical resolution of disease or for a minimum of 28 days. If a poor response is noted and bartonellosis is a differential diagnosis, azithromycin or a fluoroquinolones are considered appropriate choices. Difficulty in treatment may relate to the intracellular location of the organism. Cats with uveitis thought to be from bartonellosis should be topically with glucocorticoids to attempt to lessen inflammation and subsequent glaucoma.
To lessen the likelihood of acquiring a Bartonella spp. infection from a cat, the following were adapted from what is recommended to HIV-infected people and other cat owners by the Centers for Disease Control and the American Association of Feline Practitioners:
1. Flea control should be maintained;
2. If a family member is immunosuppressed and a new cat is to be acquired, adopt a healthy cat > 1 year;
3. Declawing is generally not advised, but immunosuppressed people should avoid bites and scratches;
4. Cat-associated wounds should be washed promptly and medical advice sought; and
5. Cats should not be allowed to lick open wounds on immunosuppressed people.

Hemoplasma spp.
There are three epi-erythrocytic hemoplasmas of cats that are currently recognized; Mycoplasma haemofelis (Mhf), 'Candidatus M. haemominutum' (Mhm), and 'Candidatus M. turicensis'. These organisms were previously called Haemobartonella felis. The organisms are likely worldwide. Mycoplasma haemofelis appears to be the most pathogenic species. In prevalence studies performed with assays capable of amplifying both Mhf and Mhm, both organisms have been detected and Mhm infection is most common. In a recent study, we collected fleas from cats and attempted to amplify hemoplasma DNA from flea digests as well as the blood of the cat. The prevalence rates for Mhf in cats and their fleas were 7.6% and 2.2%, respectively. The prevalence rates for Mhm in cats and their fleas were 20.7% and 23.9%, respectively. In addition, fleas ingest Mhm and Mhf from infected cats when feeding. Hemoplasmas have been transmitted experimentally by IV, IP, and oral inoculation of blood. Transmission by biting has been hypothesized. Red blood cell destruction is due primarily to immune-mediated events; direct injury to red blood cells induced by the organism is thought to be minimal.
Clinical signs of disease depend on the degree of anemia, the stage of infection, and the immune status of infected cats. Pale mucous membranes, depression, inappetence, weakness, and occasionally, icterus and splenomegaly are most common. Fever occurs in some acutely infected cats and may be intermittent in chronically infected cats. Evidence of coexisting disease may be present. Weight loss is common in chronically infected cats. Cats in the chronic phase can be subclinically infected only to have recurrence of clinical disease following periods of stress. Fever has been associated with chronic infections.
Diagnosis is based on demonstration of the organism on the surface of erythrocytes on examination of a thin blood film or amplification of microbial DNA by PCR assay. Organism numbers fluctuate and so blood film examination can be falsely negative up to 50% of the time. The organism may be difficult to find cytologically, particularly in the chronic phase. Real time PCR to quantify hemoplasma DNA has now been titrated and can be used to monitor response to treatment.
Doxycycline has less side effects than other tetracyclines in cats and so is preferred. Doxycycline is administered as a flavored suspension (to avoid esophageal strictures) at 10 mg/kg, PO, every 24 hours for 7 days. If there is a positive response and the cat is tolerating the drug, treatment is continued for a total of 28 days if possible. If autoagglutination is evident, prednisolone at 1 mg/kg, PO, every 12 hours is given for the first 7 days or until autoagglutination is no longer evident. In cats intolerant of doxycycline, enrofloxacin (5 mg/kg, PO, daily), marbofloxacin (1.25 mg/lb, PO, daily), or imidocarb (5 mg/kg, SQ or IM, every 14 days) may be effective. Azithromycin was not effective for the treatment of hemoplasmosis in one study. Blood transfusion should be given if clinically indicated. Treatment does not always eliminate infection and re-infection can occur. To attempt to prevent feline hemoplasma infections, flea control should be maintained. Cats should be housed indoors to avoid vectors and fighting. Clinic blood donor cats should be screened for both Mycoplasma spp. by PCR prior to use. There are currently no known human health risks.
Rickettsia felis
Rickettsia felis is a spotted fever group organism occasionally associated with fever, headache, myalgia, and macular rash in people. It has been detected in Ctenocephalides felis, C. canis, and Pulex irritans; these fleas have a worldwide distribution. Rickettsia felis has been determined in C. felis collected from cats in several countries around the world. In a study recently completed in my laboratory, 67.4% of fleas collected from 92 cats were PCR positive for R. felis DNA. Rickettsia spp. antibodies are commonly detected in cats in the United States; it is likely the cats are exposed to R. felis because C. felis is common. However, we failed to detect R. felis DNA in cats with fever in the United States. Thus, further data is needed to determine whether the organism induces illness in cats.

Summary
Because Bartonella spp., Hemoplasma spp., and R. felis infections of fleas are so common and because significant illness can occur in cats (Bartonella spp. and hemoplasmas) and people (Bartonella and R. felis), flea control is now recommended for all cats in the United States.